I've read in many places that when you look at an image your eye naturally reads it from left to right.  I always thought this made sense because that's how we read text, of course.  (What about people whose first language is one that does not read left to right?  Do they read images the way they read text?  I guess that's an issue for another post).  This concept can be applied to deciding on the composition of an image.  It's helpful to know how the eye reads a photo to know how you should position the various elements of the shot.  For example, as is discussed here: How to Use Lines, when considering how to position a diagonal line the best way to present them is to start from the bottom left corner running to the right at some angle.

How powerful this phenomenon really is became apparent to me when I was editing the other day.  While I was out shooting with the concept of lines in mind I took these photos:


Some nice elements, but not the most powerful image, especially since your eye is drawn to the end of the hallway, but there's not much going on once you get there.  Kind of anticlimactic.
Check out the next shot, though and see if you notice a difference in interesting-ness. 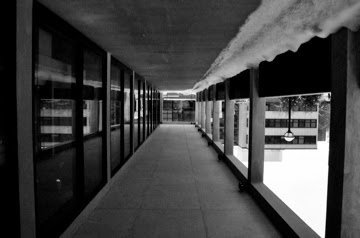 Something about it seems cooler, right?  Well if you hadn't guessed, it's just the same shot turned upside down!  This improves the image because the windows are more interesting than the open side and since your eye reads the photo from left to right, this piece dominates more of the image.  The top image feels unbalanced to me, most likely because the black windows are so much more interesting and feel like an enclosure.  The open side feels almost unsafe, like someone left the car door open while driving.
I'd be interested to explore how people who speak and read other languages naturally read photos.  There may be some significant differences.
Posted by Caitlin at 9:26 AM